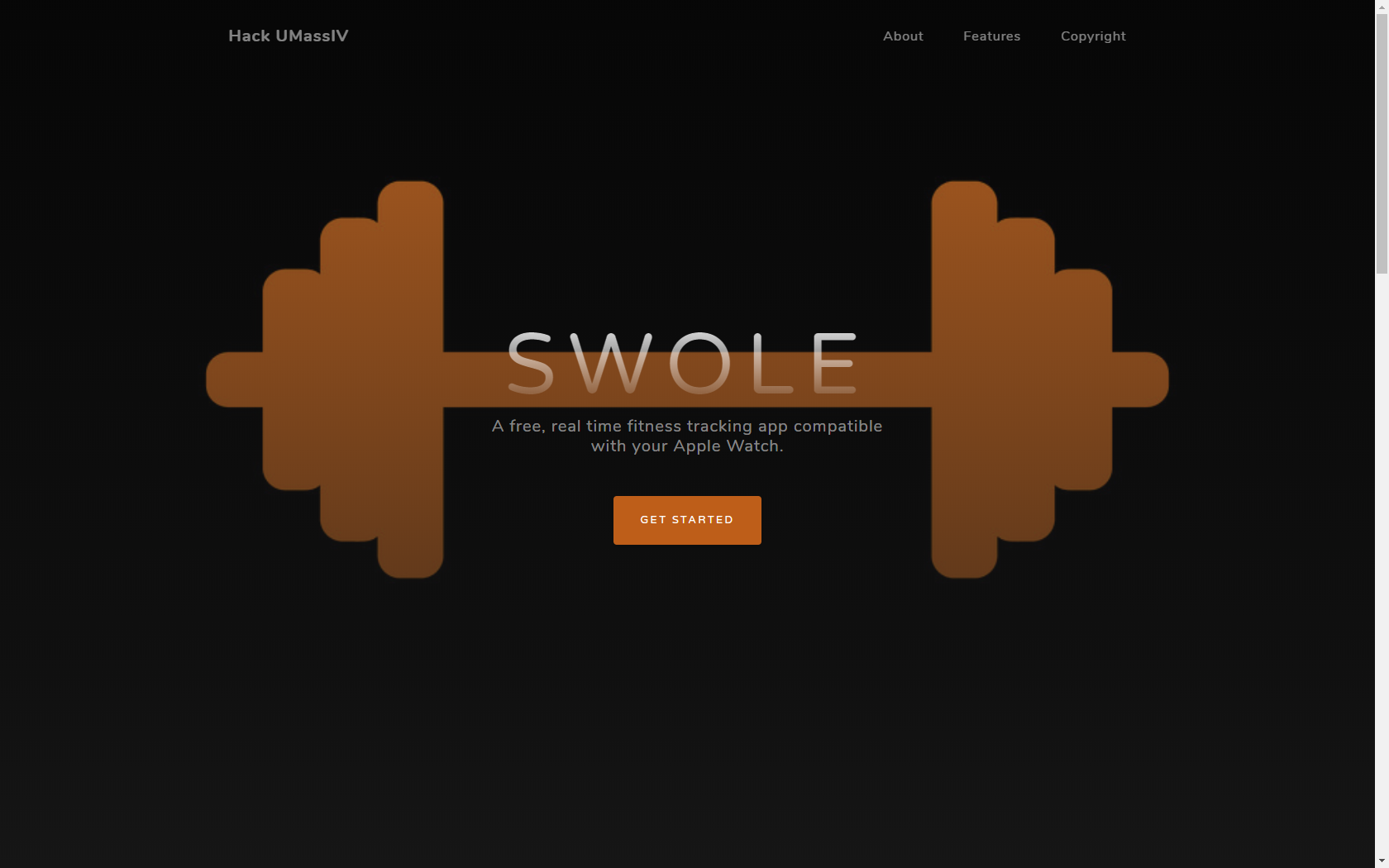 Swole utilizes your Apple Watch to enhance your workout experience through personalized workouts and real time analysis. After starting your own custom workout, your phone or watch will give you real time feedback on your form and instruct you on how to correct it.

For us, it was the entry gate of getting into fitness. For many, the hardest part about staying in shape and starting to workout is getting into it and making sure you have the correct form. Although there are numerous resources, there is nothing very intuitive or hands on that does not cost you a fortune such as a personal trainer. We believed our app could help users get into working out and making sure they have the proper form in order to ensure they are not only safe but also get the gains they want.

Our app offers real time analysis and feedback during a user's workout. Through the sensors on the apple watch, users can get real time response through visual and auditory means in order to best improve their form mid-set. Users can also utilize the app to create their own custom workouts with a wide range of exercises. Users then can set how many reps and sets they want to do of each exercise and rearrange the order of that workout. SWOLE will also give you real time progress on the number of reps and sets you still need to complete. We also made a promotional website to help raise awareness for our product.

Firstly, we found a big white board and started brainstorming. Eventually we settled upon this idea and started to draw up designs. It wasn't until we had most of the framework and designs for the entire project did we start creating the project. Although this took time, it made the programming process much easier. We also digitized most of our designs in order to enhance clarity for the IOS developers. We then started to mess around with the Apple Watch and figuring out how we can strip the data off the watches sensors and make it useful. On the side the website was being built and the AWS RDS server was being created. Once the data was found useful and the math was figured out, it was full pedal on IOS Dev and making sure our app could communicate with the watch and present the data in meaningful and simplistic way to the user.

Our first major issue was the complicated math and physics behind our project. We spent many hours attempting to understand how to usefully interpret and utilize the data we were pulling from the sensors on the apple watch. Eventually we were able to figure it out and get real useful data.
Secondly, we struggled to connect AWS with our mobile app. We were unaware of some of the plugins since it was our first time utilizing AWS' tools. Eventually we found a framework and were able to integrate our server with our mobile app.

We are proud of our utilization of our Apple Watch app and the usage of it's data back on the phone. Initially we had some issues getting this data between the two but eventually we were able to pull it out. We are also proud of the math and physics it took to make the data the apple watch was giving us meaningful. None of us had much physics experience and being able to figure out the equations through some tinkering and reading some papers online was highly rewarding. We are also super proud of how the app came out and the design process through it all. We believe it looks extremely clean and is easy to use for all users.

Firstly, we would create our own bands instead of utilizing the apple watch. This would allow for broader integration as well as cheaper options for non-apple watch users. It would also allow the potential of multiple bands for more complicated exercises which may require more than two hands. We may also add more layers of customization such as more user data and user's health tracking similar to the Health App provided by Apple.